I wanted to post this on my blog to get this information out. Please check out Dr. Jean Logan website. I was told about these Glyphs and found that that they really do help. I bought the cards, so I can use them for my clients, students, family, and myself. 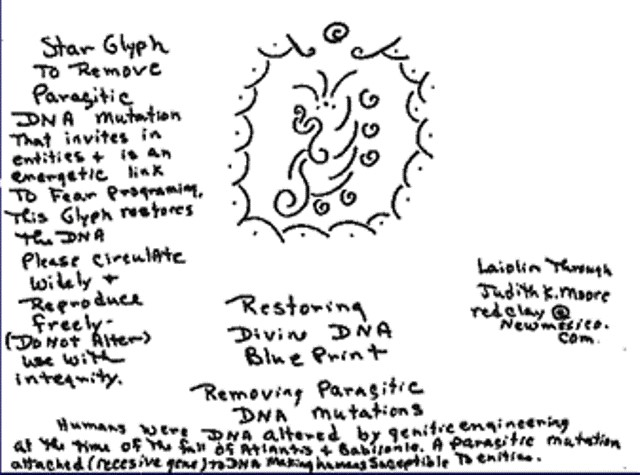 What Are Healing Glyphs?

First of all, I want to explain what a glyph is. According to Webster’s Dictionary, a glyph is:

One internet definition site defined it as “a symbol or character, especially one that has been incised or carved out in a stone surface like the characters of the ancient Maya writing system.”

A few years ago, I received an email from a friend that contained a glyph. The glyph was a small drawing of some type of insect with a wavy line around it. The author of the glyph wrote under it, “Restoring Divine DNA Blueprint.” She also wrote next to it and under it, “Star Glyph to remove Parasitic DNA Mutation that invites in entities and is an energetic link to Fear Programming. This glyph restores the DNA. Please circulate widely and reproduce freely—(Do not Alter) use with integrity. Humans were DNA altered by genetic engineering at the time of the fall of Atlantis and Babylon. A parasitic mutation attached (recessive gene) to DNA making humans susceptible to entities.” I have included a copy of this glyph below.

There was the name, Judith K. Moore, and her email address on the page. I have always been fascinated by glyphs, and this one was certainly no exception. I printed the page and cut out the picture of the glyph. Then I thought, “All right, what should I do with it?” It said, “Use with integrity,” but I wondered, “How?” At that moment, I either decided or was guided to place the drawing on my solar plexus. Immediately there was a tremendous amount of activity in my liver. I would call it a level two pain on a one to ten scales. It certainly was not enough to have me running down the street screaming, but definitely very noticeable. This went on for several minutes, after which I did a little energy healing in the area. When I tried this again the next day, nothing happened. My son, Patrick, tried the glyph in the same manner but did not notice anything. I wasn’t sure what it was all about, but I thought, “Whatever it was, I had it, and now it’s gone.” I also thought, “Whoever created this glyph with this much power, I can do that too!”

This site uses Akismet to reduce spam. Learn how your comment data is processed.